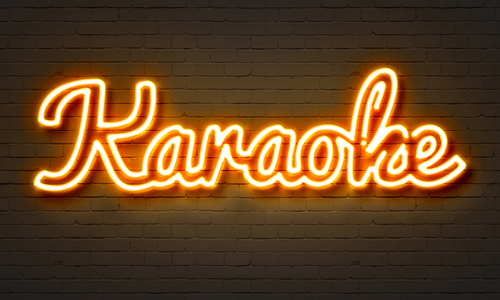 While karaoke’s popularity has been up and down in recent years, it’s still a beloved pastime for many a pub-going Brit – and plenty of us have a favourite go-to song choice when it comes to stepping up and belting one out.

Working in an industry like ours, we’ve heard a fair few karaoke car crashes in our time with some horrendous memories of caterwauling and tone deaf wannabe songsters. No doubt we’ve all been there, witnessing an excruciating singalong built firmly on enthusiasm rather than talent!

The beauty of karaoke though is that you don’t actually need to be any good at singing to give it a go. Even though it’s painful on the ears, bad singers are all part of the entertainment, which makes karaoke a pastime that singers of all abilities can enjoy.

Then of course there are those hidden gems unearthed during a bout of karaoke. Some of us like to hide our light under a bushel until the opportune time. And what better moment than down the local pub on karaoke night? A cheer of appreciation from pub regulars is no doubt akin to the feeling that The Voice contestants experience when a celebrity’s chair swings round to face them…or so we’d like to think.

According to our customer feedback, karaoke has seen a surge in popularity in recent months, perhaps inspired by high profile singalongs in James Corden’s Carpool Karaoke. If Michelle Obama can do it, after all, then so can you!

But is there a favourite karaoke song choice? From our experience over the years, and from customer feedback, we’ve found there’s a definite top 25 of classics that people revert to. And what are those 25 songs we hear you say?

There are some absolute classics there, but just because they’re classics and known by all, doesn’t mean they’re necessarily easy to sing! Indeed, it’s very hard to come close to some of the greats on the above list when under the scrutiny of a watching audience…we certainly commend people for trying though!

What about you? Have you got a go to karaoke number in your repertoire?